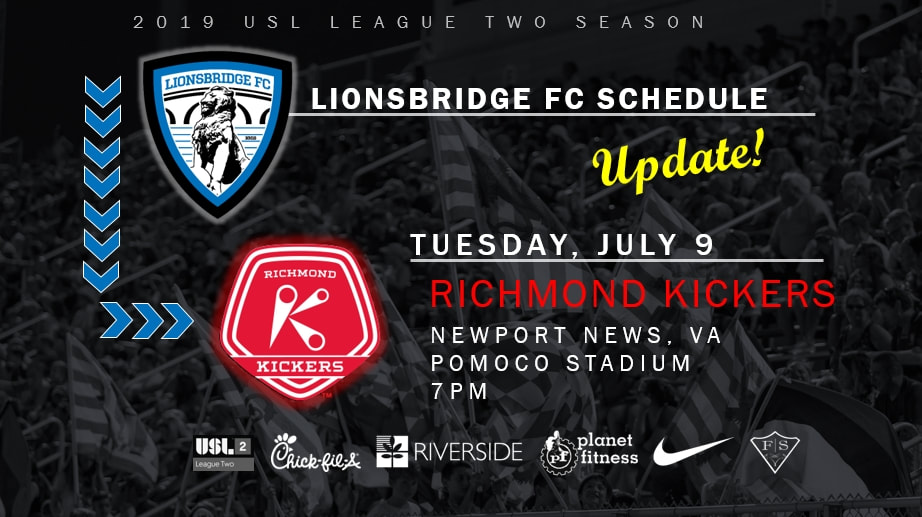 ​
​PRO SOCCER COMES TO THE PENINSULA FOR THE FIRST TIME
Mark your calendars for a historic occasion! Lionsbridge FC will welcome the Richmond Kickers, the longest continuously running professional soccer club in the United States, to Pomoco Stadium on the campus of Christopher Newport University for a friendly on Tuesday, July 9.

The event will mark the first-ever game on the Peninsula involving a professional soccer team, and the first game involving a professional team in any sport since 1996, according to the Daily Press.
ORDER: Season Ticket Jerseys & Wristbands
DOWNLOAD the 2019 Schedule: iCal for iOS, Android
​Founded in 1993, the Richmond Kickers are a three-time United Soccer League champion. They also won the 1995 U.S. Open Cup, the biggest and most prestigious soccer tournament in America. The Kickers play their home games at City Stadium in the River City and have averaged nearly 4,000 fans per game the past three seasons.

The Kickers are members of USL League One, a professional league one level of competition above Lionsbridge FC's USL League Two, the top amateur league in North America.

“This will be a landmark occasion for our community. To experience a professional soccer game here in our backyard will be special. It’s never happened before, and hopefully this will be a springboard for our community, club and players,” Lionsbridge FC co-founder Mike Vest said. “The Kickers have been a true flag bearer for American soccer for more than 25 years and we’re honored to host them on the Peninsula.”

“It’s very exciting for the club to invite the Richmond Kickers down to play in our home stadium,” head coach Chris Whalley said. “The opportunity for our fans to see a full-time professional club at Pomoco Stadium is great.  And it’s a great opportunity for our guys to showcase their talent against professional players and to use it as a shop window to help themselves.”

“We are very excited to partner with Mike, Chris, and Lionsbridge FC to enjoy a match in Newport News,” said Richmond Kickers President & General Manager Matt Spear. “For the teams, it adds another competitive opportunity and we will be able to evaluate their players. Plus, it allows us to get in front of the passionate soccer fans on the Peninsula and extend an invitation for them join us in Richmond on a different date for a USL League One match.”

Gates will open at 5 p.m. with the Lionsbridge FC pre-game festival with food trucks, a beer garden, bounce houses and other family-friendly activities. The game will begin at 7 p.m.  The Kickers will have a marketing presence at the game and fans will have the opportunity to win tickets to a Kickers game at City Stadium in Richmond.

Anticipation for Lionsbridge FC’s 2019 season has reached a fever pitch as the club’s season ticket sales have doubled compared to this time last year. Season Ticket Jerseys and Season Ticket Wristbands are on sale now via the team’s website, LionsbridgeFC.com.  Group tickets (20 or more) may be purchased by calling 757-656-9659.  Single game tickets will go on sale in April.

Lionsbridge FC will play in the highly-competitive, seven-team South Atlantic Division of USL League Two. Last year, the Lions finished in third place and took points off every opponent except one in a division that featured a combined 121 NCAA Division I players and 4 MLS draft picks.

According to the Daily Press, the last sporting event on the Peninsula involving a pro sports team happened 23 years ago -- an NBA exhibition game at the Hampton Coliseum in 1996 between the Golden State Warriors and New Jersey Nets. No professional sports team has called the Peninsula home since 1982 when the Peninsula Pilots, then a minor league affiliate of MLB's Seattle Mariners, played their home games at War Memorial Stadium in Hampton. Hampton Coliseum previously served as the home for multiple minor league hockey teams (1971-81) and the part-time home of the fabled Virginia Squires of the American Basketball Association (1970-76).