Lionsbridge FC competes in USL League Two, the top pre-professional men’s soccer league in North America. The team is headquartered on the Virginia Peninsula and plays its home games at TowneBank Stadium in Newport News. All home matches are streamed on Facebook Live.

AWARDS:
The club was recognized in 2019 as the USL League Two Franchise of the Year.

Lionsbridge FC won the USL's Chesapeake Division title in 2022, has twice hosted the League Two playoffs (2021, 2022) and qualified for the Lamar Hunt U.S. Open Cup in 2022. The club has won the Coastal Virginia Challenge Cup against archrival Virginia Beach every year since 2019. Lionsbridge has completed two undefeated regular seasons (2020, 2022).

Lionsbridge FC has also served as a launching pad for the professional careers for 10 front office interns who have gone on to positions in MLS, USL, NBA, NHL, PGA, MiLB, ECHL and multiple NCAA athletic departments.

ATTENDANCE:
Lionsbridge has led its conference in attendance in each of its five seasons and seen its attendance improve every year since its inception. Among 100+ USL League Two clubs, Lionsbridge finished 4th nationally in attendance in 2018, 3rd in 2019, 3rd in 2021 and 2nd in 2022. The club's single-game attendance record was set on July 3, 2022 when 3,547 fans gathered to see Lionsbridge FC defeat archrival Virginia Beach United, 2-1.

COMMUNITY:
The club receives incredible support from the local community with hundreds of season ticket holders, two official Supporter Groups (Defenders of the Bridge and Overtown Ultras), corporate partnerships with businesses across multiple sectors, a network of host families that house players during their stay, strong alliances with every youth soccer organization in the area, promotional relationships with numerous local non-profit organizations and frequent coverage from the local ABC, CBS, FOX and NBC television affiliates in one of the nation's top 50 media markets.

1) Reflect and add to the amazing spirit that already exists on the Peninsula; 2) Provide positive role models for our young people; 3) Shine a light on the important work being done by the non-profit organizations in our community; 4) Support local businesses; 5) Provide a first-class experience for players and interns who are looking to launch their professional sports careers.

It's about more than soccer. It's community. It's a family night out. It's local flavor. There is something for everyone: music, a beer garden, food trucks, bounce houses and after select home games, fireworks.

Since 1932, the Lions Bridge has been an iconic Peninsula landmark, majestically situated in The Mariners' Museum and Park on the banks of the James River. The bridge has long served as a gathering place for our residents and Lionsbridge FC is adding to this history.

Lionsbridge FC is led by co-founders Mike Vest and Kevin Joyce. Alongside Mike and Kevin is a dedicated group of interns, volunteers and host families. Without their contributions, there wouldn't be a Lionsbridge FC. 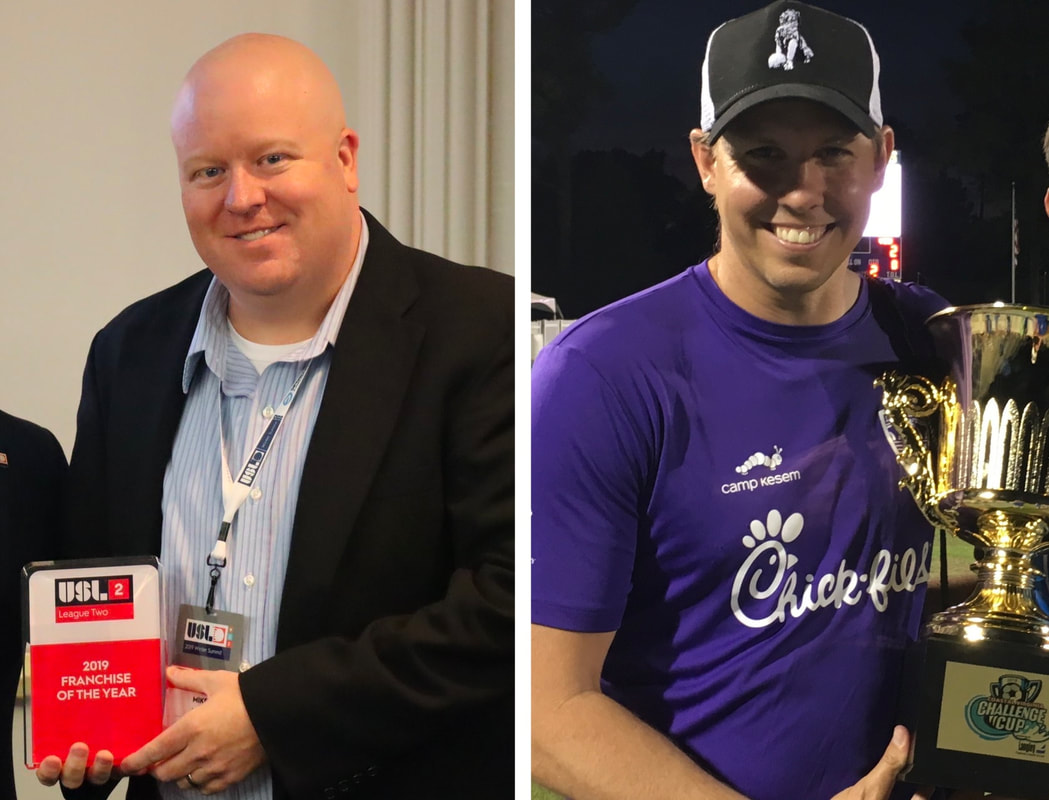 (Left) Mike is a 25-year sports industry veteran with a background in marketing, media rights, content development and distribution and corporate sponsorship. He previously worked at his alma mater, the University of Kansas, as well as Wake Forest University, Big Ten Network, IMG and the Atlantic 10 Conference prior to launching Lionsbridge FC. He and his wife, Kristie, have a son, Jackson.

(Right) Kevin is a Registered Representative with Financial Security Management, Inc. in Newport News, Va. A graduate of the United States Naval Academy, Kevin is also the past chair of the Virginia Peninsula Chamber of Commerce. Kevin has three sons, Asher, Silas and Ezra.

Funny story:  Kevin and Mike met by happenstance in 2015 while their boys were playing on their neighborhood school's playground. Upon finding out that Mike worked in sports, Kevin asked, "hey, how does someone become the owner of a sports team?" Mike thought that was a really ridiculous question.