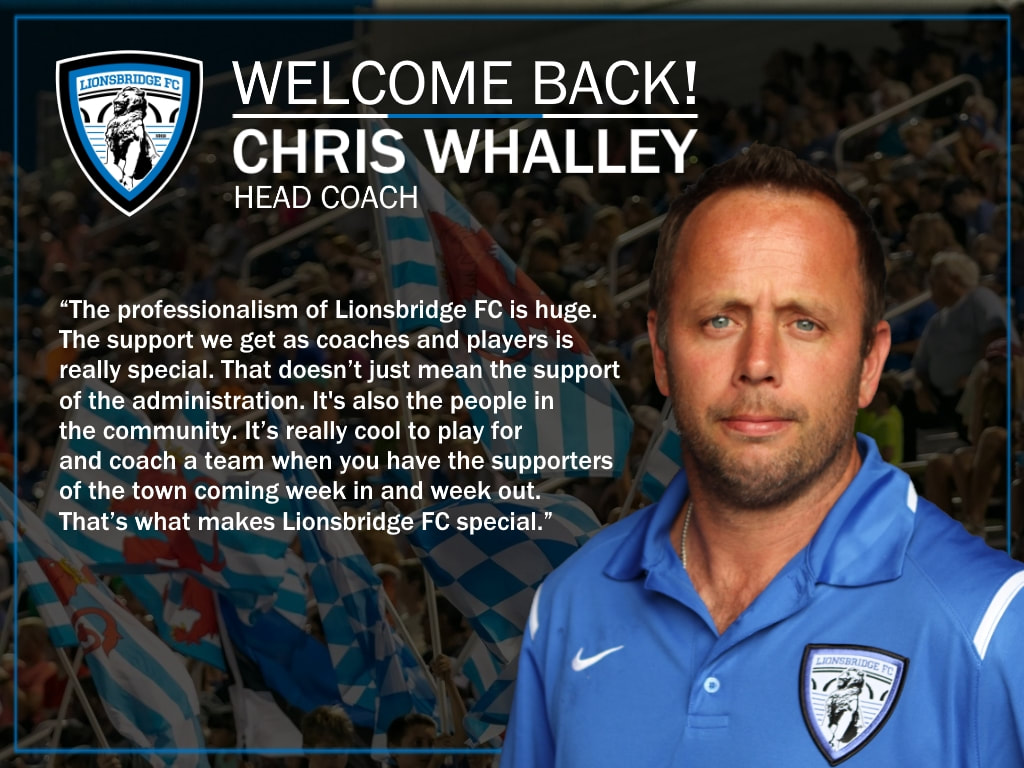 Upon taking the helm of the startup franchise in February 2018, Whalley assembled the Lionsbridge FC roster and coaching staff entirely from scratch. Despite being the only expansion team in the extremely competitive six-team South Atlantic Division, the club finished in third place. Whalley guided the Lions to a successful 6-5-5 record in all competitions during the club’s first season.

“The professionalism of Lionsbridge FC is huge,” Whalley said. “The support we get as coaches and players is really special. That doesn’t just mean the support of the administration. It’s also the people in the community. It’s really cool to play for and coach a team when you have the supporters of the town coming week in and week out. That’s what makes Lionsbridge FC special.”

“We’re obviously thrilled to have Chris back for the upcoming season. When Chris came on board last year, we knew we were getting a proven winner and a program builder. In a very short time, he established a culture of commitment, accountability and development, and the on-field results followed. Chris is truly one of the rising stars in the coaching profession and we’re fortunate to have him,” said Lionsbridge FC co-founder Mike Vest.

Under Whalley’s leadership, the club accomplished many impressive milestones, including:


Currently in his 13th season as a collegiate head coach, Whalley’s teams have collectively posted 136 wins, 71 losses and 27 draws. He has taken teams to three NCAA Division II Tournaments and a number one national ranking.

In addition to his Lionsbridge FC post, Whalley is currently also in his fifth season as the head men’s soccer coach at NCAA Division II Chowan University in Murfreesboro, N.C. Prior to that, he was an assistant coach at Appalachian State and the head coach at Lees-McRae College, Wisconsin-Milwaukee and in the PDL with the West Virginia Chaos.

At Chowan, he inherited a program that went 1-14 in the year prior to his arrival and immediate turned the team around, posting a 12-8 record in his first season, the most wins in school history. At Wisconsin-Milwaukee, Whalley doubled the team’s win total in his first season. At Lees-McRae, Whalley led the Bobcats to a #1 national ranking in NCAA Division II, three NCAA Tournament appearances including the national runner-up in 2009 and remains the most successful coach in program history. At West Virginia, Whalley guided the Chaos to its best-ever record in 2009.

As a player, Whalley played professionally for the Reading (Pa.) Rage of the USL and in the PDL with the Chaos. When he retired, he finished as the franchise’s all-time leader in games played, goals, assists and points. He played collegiately at Mercyhurst College in Erie, Pa., and led the Lakers to a NCAA Division II Final Four.

Whalley resides in Suffolk, Va., with his wife, Alexis, and son, James.

Lionsbridge FC competes in USL League Two, the top pre-professional league in North America. Out of the 74 teams in the league, Lionsbridge FC finished 4th nationally in attendance in 2018. Season ticket sales are on sale now.

Home games are played on the campus of Christopher Newport University in Newport News. Each game is preceded by a two-hour pre-game community festival complete with a beer tent, food trucks, bounce houses, music and family entertainment.