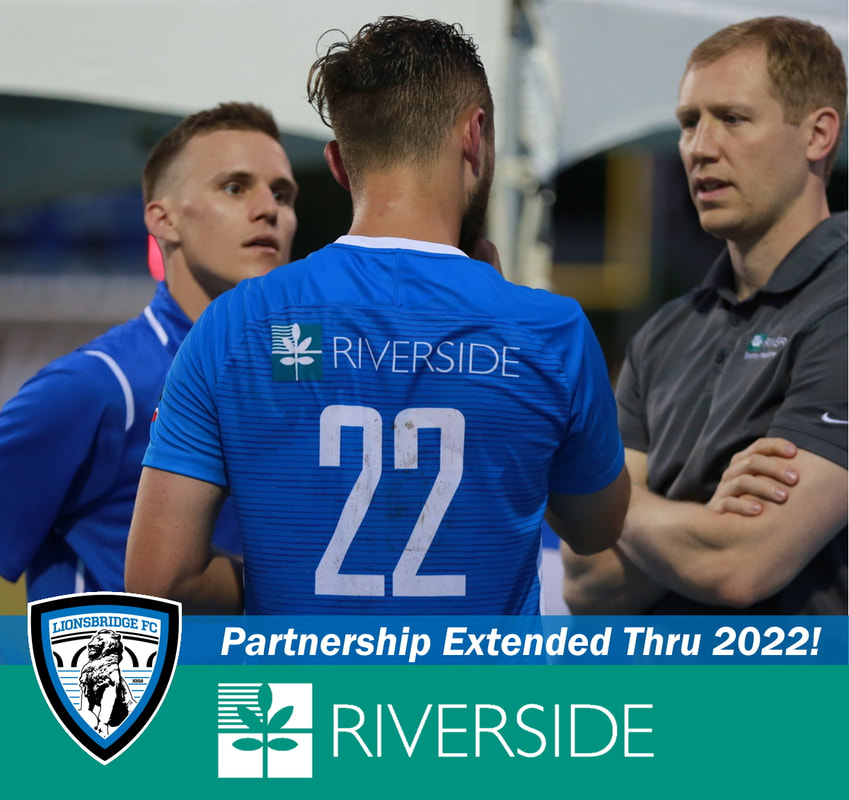 November 7, 2019 – Lionsbridge Football Club and Riverside Health System will extend their sports medicine and community partnership through the 2022 season, leadership from the two organizations announced today.

The agreement continues the relationship between the Peninsula’s USL League Two soccer club and the Peninsula’s top health care provider. Riverside is the exclusive Sports Medicine and Athletic Training provider of Lionsbridge FC, delivering comprehensive medical services for players on match day, during training sessions and team off days.

“Riverside Health System has been a fantastic partner since day one and we are proud to work together to positively impact our community in many ways,” said Lionsbridge FC co-founder Mike Vest. “It is reassuring to know that our players will continue to receive first-class medical care.”

Riverside and Lionsbridge FC coaches and players will continue to host a free community youth soccer clinic each summer. Registration for the clinic has filled within hours each of the past two summers.

Riverside also receives logo placement on the back of Lionsbridge FC home and away game jerseys.

Lionsbridge FC is entering its third year of competition in 2020 as a member of USL League Two, the top pre-professional league in North America. USL League Two consists of more than 70 teams across the U.S. and Canada, functioning as Major League Soccer’s primary developmental and player showcase platform. Four former Lionsbridge players have signed professional contracts in England, Sweden and the United States.

Riverside Health System is an integrated network touching 2 million lives annually. Serving Coastal Virginia since 1915, Riverside is guided by a mission to “care for others as we would care for those we love.” The health system offers a variety of services and programs in the areas of prevention, primary care, diagnostics, neurosciences, oncology, orthopedics, aging-related services, rehabilitation, medical education, home care and hospice. Riverside operates five acute care hospitals and a behavioral health hospital, in addition to a physical rehabilitation hospital and long-term acute care hospital in partnership with Select Medical.