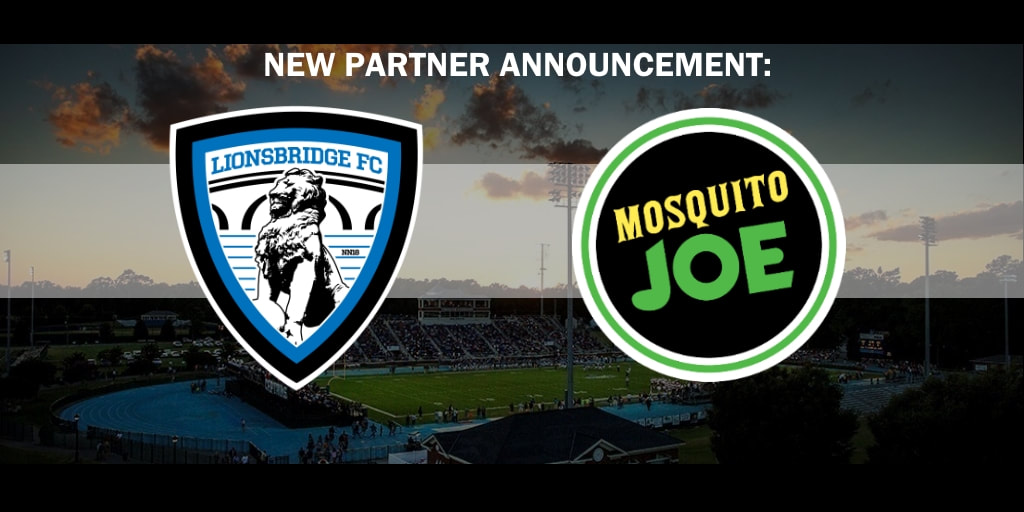 (Jan. 24, 2018) – Lionsbridge Football Club, the Peninsula’s new PDL soccer team that begins competition in May, announced a partnership today with Mosquito Joe, the Hampton Roads-based company that is “making outside fun again” by providing mosquito control services to residential and commercial customers.

“Eight years ago, Mosquito Joe began building from the ground up right here in Hampton Roads and they have quickly become one of the top-rated franchise businesses in the country. We are proud to be supported by a company whose incredible success story started here in our backyard,” Lionsbridge FC co-founder and chairman Mike Vest said.

“Mosquito Joe is all about making outside fun again and Lionsbridge FC is going to make the Peninsula an incredibly fun place to be this spring and summer,” said Mosquito Joe’s Robert Rummells, whose territory includes the entire Peninsula.  “We love what Lionsbridge FC is building for our community and we’re confident this partnership will help grow our business.”

Lionsbridge FC is a new team in the Premier Development League (PDL), the top pre-professional league in North America, and begins competition in May. The PDL consists of more than 70 teams across the U.S. and Canada, functioning as Major League Soccer’s primary developmental and player showcase platform.

Headquartered in Hampton Roads, Mosquito Joe operates in 32 states and in 2017, made the list of Top Franchises for Veterans by Entrepreneur, Inc. Magazine’s Fastest Growing Private Companies, was number one in category on Entrepreneur’s 2018 Franchise 500, landed on Franchise Business Review’s Top Franchises in the home services category and was named Best Places to Work by both Inc. and Outside Magazine.