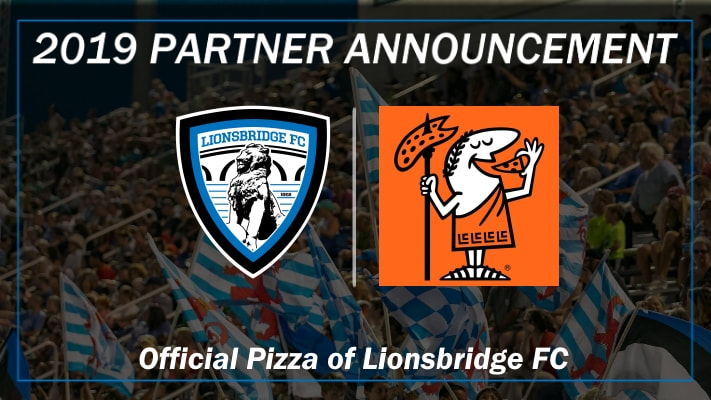 As part of the partnership, Tidewater Pie and Lionsbridge FC will conduct multiple in-game activations at home games this summer, including the “Let’s Get Crazy” promotion.  If a Lionsbridge FC player scores a goal after the 80th minute of any home game, every fan in attendance at Pomoco Stadium will win a free order of Crazy Bread, courtesy of Little Caesars.  In addition, at halftime and after every Lionsbridge FC goal, the restaurant’s mascot, Caesar Man, will launch t-shirts into the stands.

Fans will also have a chance to win tickets to Lionsbridge FC home games on the Tidewater Pie Facebook page.  Tidewater Pie will also receive brand visibility on the stadium video board, game program, website and email blasts.

“It’s exciting to create partnerships with creative entrepreneurs like Chris and fun brands like Little Caesars,” said Mike Vest, Lionsbridge FC co-founder and chairman. “The Tidewater Pie team is committed to this community and we know Lionsbridge fans will love to get crazy at the end of every game.”

Lionsbridge FC has sold more than 500 season tickets for the 2019 season. Season Ticket Jerseys and Season Ticket Wristbands are available via the team’s website, LionsbridgeFC.com.  Group tickets (20 or more) may be purchased by calling 757-656-9659.  Single game tickets go on sale April 26.