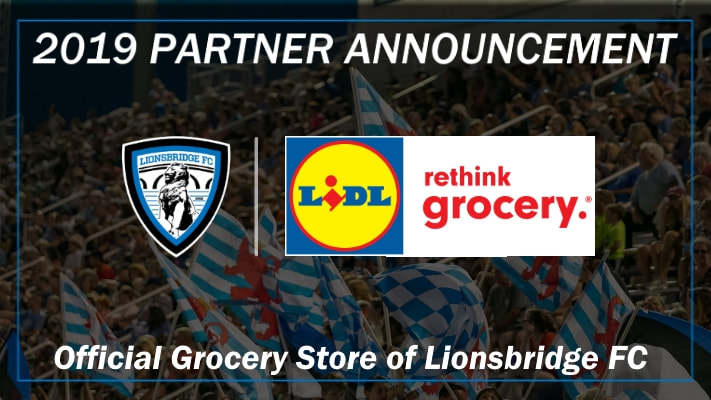 As part of the partnership, Lidl and Lionsbridge FC will conduct a food drive at the team’s July 13 game at Pomoco Stadium to benefit the Peninsula Foodbank. Selected players will make in-store appearances at Lidl’s area locations during the season where fans will have the opportunity to get autographs, take photos and win Lionsbridge FC tickets and merchandise.

In addition, Lidl will add to the Lionsbridge FC match day experience at Pomoco Stadium with games, activities and giveaways in the Fan Festival Zone and a halftime contest where fans can win free groceries from Lidl.

“We are so pleased to add Lidl as our newest partner and they are a terrific match for Lionsbridge FC. We are both planting roots in the community and continuing to grow. We look forward to making a positive impact in the community together and creating awesome experiences for fans and customers,” said Lionsbridge FC co-founder Mike Vest.

Lionsbridge FC has sold more than 500 season tickets for the 2019 season, almost double the year-over-year pace from the 2018 inaugural season. Season Ticket Jerseys and Season Ticket Wristbands are available via the team’s website, LionsbridgeFC.com.  Group tickets (20 or more) may be purchased by calling 757-656-9659.