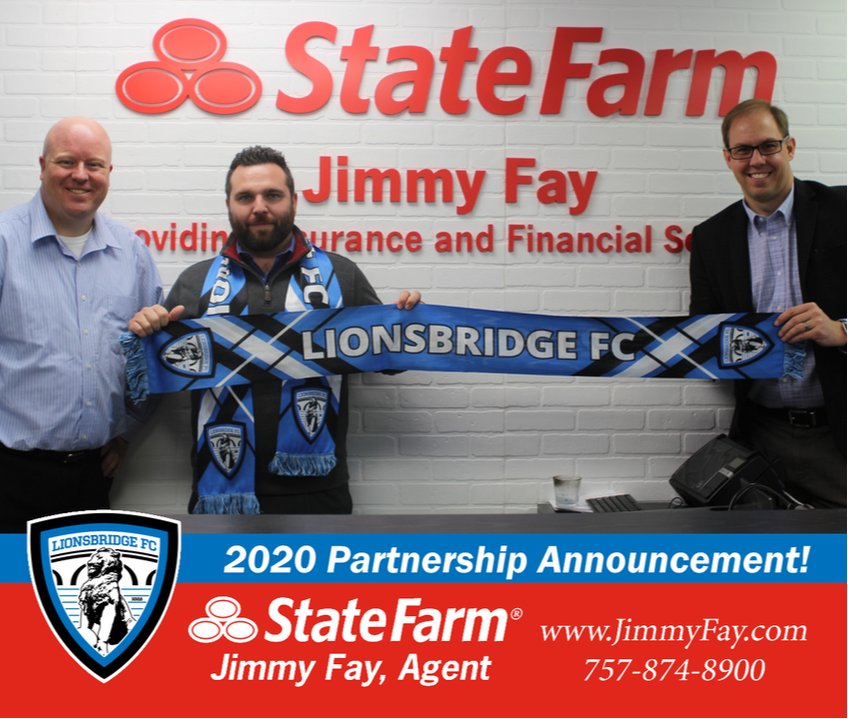 (December 19, 2019) – Lionsbridge Football Club and State Farm agent Jimmy Fay have teamed up for a new partnership in 2020 that will make a positive impact in the community.

In addition, the Jimmy Fay State Farm Agency will be a presenting sponsor of Lionsbridge FC’s home game on Saturday, May 30. Throughout the season, the agency will receive promotion through the stadium video board, field level signage, tent space in the Festival Area and presenting sponsorship of the “Good Neighbor Play of the Game” on Facebook, Twitter and Instagram.

“We love to partner with local, small businesses that are having a major impact, especially for the youth, in our community. That is why we’re excited to link up with Lionsbridge FC, which has quickly become a community asset in a short amount of time,” Jimmy Fay said.

Conveniently located at 13193 Warwick Blvd., Suite 100 in Newport News, Jimmy Fay State Farm Agency offers customer specific insurance and financial products and provides education and awareness to the Hampton Roads community.  Jimmy Fay State Farm Agency helps customers navigate all of their insurance and financial needs. The agency has a particular emphasis on life and health insurance, but cover it all, including home, auto, business and property.  For more information, contact Jimmy Fay at 757-894-8900 or JimmyFay.com.

Lionsbridge FC, the 2019 USL League Two Franchise of the Year, is entering its third year of competition in 2020. The club led the USL League Two Eastern Conference in attendance in 2018 and 2019 and five former players have signed professional contracts – two in England and one each in Australia, Sweden and the United States.
#ThisIsOurBridge