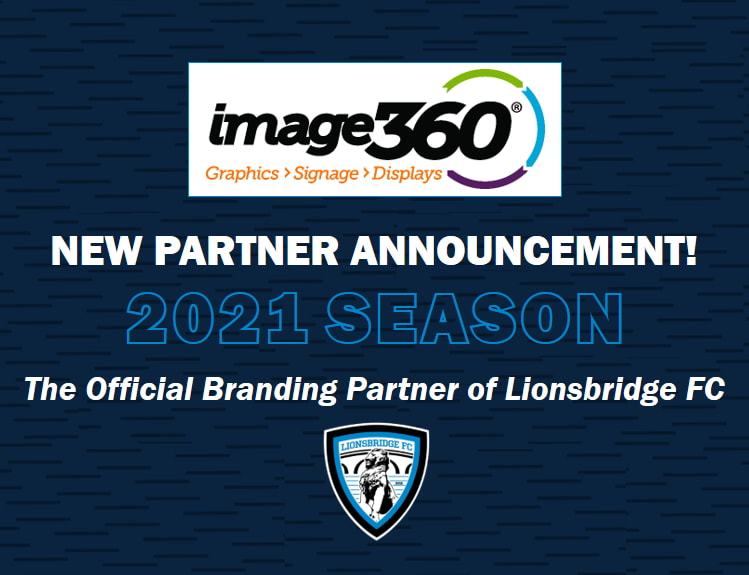 (April 27, 2021) – Lionsbridge Football Club and image360 will join forces again during the club’s 2021 season. As part of the partnership, image360 is designated as the Official Branding Partner of Lionsbridge FC.

Located at 11712 Jefferson Avenue in Newport News, image360 is a full-service branding shop specializing in signage, graphics solutions and Solar Film for residential and commercial. The business is locally owned and operated by Josh and Clarissa Torres.

“Josh and Clarissa have been phenomenal partners and supporters of Lionsbridge FC since the very beginning, and we are so proud to continue our work together,” said Lionsbridge FC co-founder Mike Vest. “We bring them problems and they always give us solutions. We wholeheartedly recommend image360.”

“We love being a part of Lionsbridge Football Club. The chance to be part of a club, local to the Peninsula, is truly needed and the fans are very dedicated to the success of the club,” said CEO Josh Torres. “Just like Lionsbridge strives for championships, we aim to be the best at delivering compete business-to-business solutions serving Lionsbridge fans and our customers.”

Throughout the season, image360 will receive promotion through the stadium video board, field level signage and presence on Lionsbridge FC digital media platforms.

Lionsbridge FC, the most recent recipient of the USL League Two Franchise of the Year award, is entering its fourth season of competition in 2021. The club has led the USL League Two Eastern Conference in attendance every year since its inception and 11 former Lionsbridge players have signed professional contracts in the United States, England, Sweden and Australia.