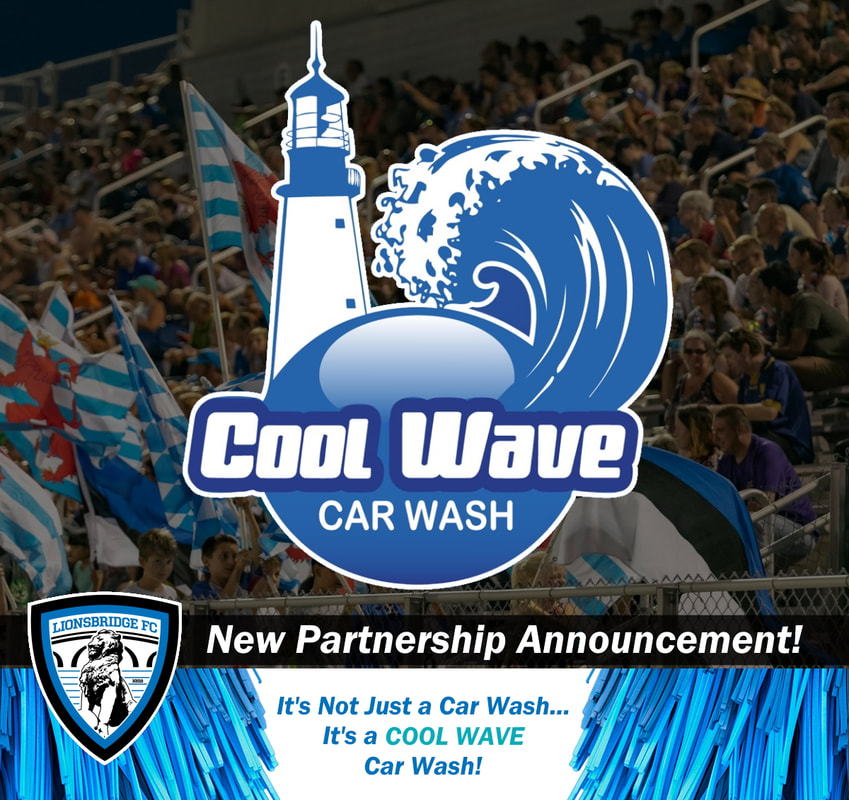 During each home game, Lionsbridge FC will conduct a Cool Wave Car Wash promotion. The fan with the “Dirtiest Car in the Parking Lot” will be recognized on the public address system and will receive a free wash from Cool Wave Car Wash.

Throughout the season, Cool Wave Car Wash will also receive in-stadium recognition through static and digital signage as well as live broadcast integration.

“We are excited to partner with Lionsbridge FC. Mike and his team are all about creating a great family experience. This and many other traits about their organization parallel the beliefs of the Cool Wave team,” said Cool Wave Car Wash founder Bobby Willis.

“We are proud to partner with Cool Wave Car Wash, a company that was also built from scratch right here in our community with a true dedication to superior customer service. Bobby Willis has elevated the experience of a getting a car wash to the next level and in doing so, has a created a legion of loyal customers,” said Lionsbridge FC co-founder Mike Vest.

Cool Wave Car Wash has eight locations in Newport News, Hampton, Poquoson, Langley AFB, Smithfield and Ft. Eustis, with a ninth location slated to open in spring 2020.  At over 220 feet long, the new Cool Wave Car Wash location, located on Jefferson Avenue across from Tech Center will become the largest car wash in America. Willis has incorporated many unique features in the location, which have never been seen before, to create the ultimate customer experience.

ABOUT LIONSBRIDGE FC:
Lionsbridge FC competes in USL League Two, the top pre-professional men’s soccer league in North America. The club was recognized in 2019 as the USL League Two Franchise of the Year. ​Founded in 2018, Lionsbridge FC has led the Eastern Conference in attendance with nearly 1,500 fans per game in each of its first two seasons. The team finished 4th out of 74 teams in attendance in 2018 and 3rd in 2019. Seven Lionsbridge FC players have gone on to sign professional contracts -- three in the United States, two in England and one in Sweden and Australia. Home games are played on the campus of Christopher Newport University. Every game is preceded by a 2-hour community festival with bounce houses, family entertainment, music, beer garden and the area’s top food trucks.  All home matches are streamed on Facebook Live.