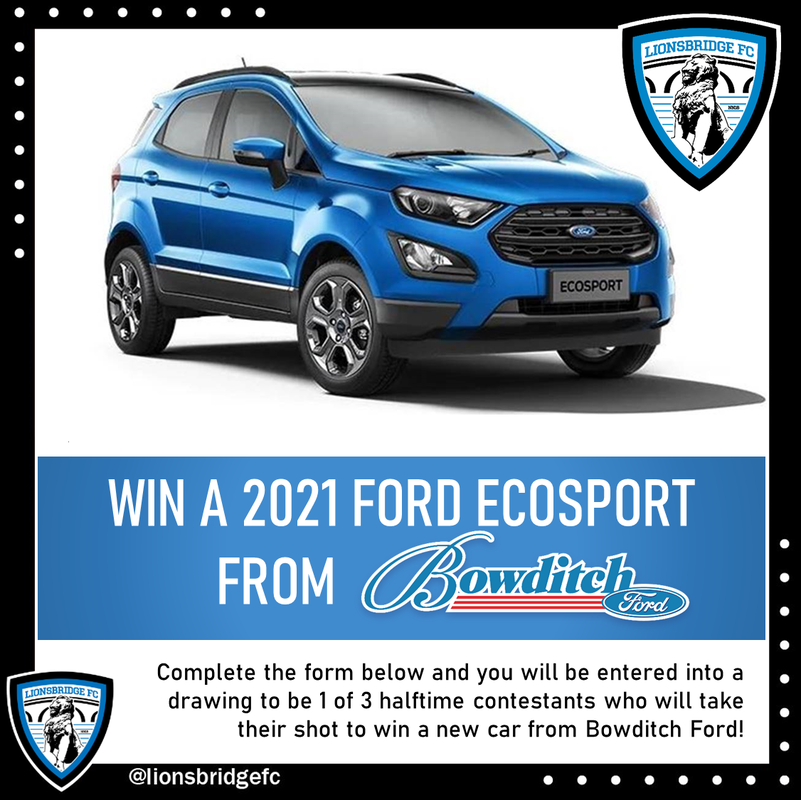 Official Rules for the Bowditch Ford Halftime Car Giveaway Promotion:
By entering the "Bowditch Ford Halftime Car Giveaway" Promotion ("Promotion"), you accept and agree to these Official Rules, including all eligibility requirements and decisions arising out this Promotion made by Lionsbridge Football Club ("Club"), which are final and binding in all matters related to the Promotion. Winning a prize is contingent upon fulfilling all requirements set forth herein.

Eligibility: You must be a legal resident of the United States and at least 18 years of age at the time of entry. The following persons ae ineligible to enter the promotion.  1) Employees, agents, successors, and assignees of Sponsor, its advertising agencies and promotional companies involved in this Promotion, as well as family and household members of same.  3) Current or former professional and semi-professional soccer players or coaches; 4) Anyone who has played or coached high school or college soccer at any level (Freshman, Junior Varsity or Varsity for men or women) in the past five (5) years; 5) Anyone who has played on or coached an Olympic or international soccer team in the past five (5) years; 6) Anyone who has played as a field-goal kicker for Varsity high school, college, semi-professional, or professional football in the past five (5) years.

How to Enter: Subject to the eligibility requirements set forth herein, individuals may enter the promotion online at LionsbridgeFC.com/BowditchContest (each, an "Entrant").

Entries: By entering the Promotion, Entrants agree to these Official Rules. Entrants may subscribe to receive the Club email newsletters, which are sent at least once per week with exclusive video, photo, upcoming events and special offers. Entrants are not required to subscribe for entry and may opt out of email newsletters by following the instructions provided on each email communication.

Prize: The first Contestant to successfully kick the ball through the target hole according to the specifications above will receive a voucher for $20,658 from the Club to redeem on the purchase of any vehicle of its choice from Bowditch Ford (11921 Jefferson Ave., Newport News, Va.), exclusive of additional vehicle fees or applicable taxes for the purchase of such Ford vehicle (the "Prize"). In no event will any Winner be entitled to receive cash or cash equivalent as the Prize. The Prize is limited to one Ford vehicle voucher valued at $20,658. No substitutions, cash equivalents or transfer of the Prize is permitted except at the sole discretion of the Club who reserve the right to substitute the prize with one of equal or greater value. The Club makes no representation or warranty that the prize can be sold, bartered or traded for at stated values. Values are subject to market conditions, which can fluctuate. The Prize will be provided at a date, time and location determined in the sole discretion of the Club. The Prize is awarded subject to applicable legal restrictions, if any. All decisions are final on all matters relating to the awarding of the Prize and Promotion. The winner must not be under any legal impediment that would prevent the Winner from accepting the Prize and must be able to participate in the Promotion and accept the Prize on the date specified by the Club. Otherwise, the Prize will be forfeited.  Any and all costs and expenses associated with Prize acceptance and use are the sole responsibility of the Winner, including, without limitation, all federal, state, local taxes, transportation and meals, lodging, gratuities and souvenirs and all registration, license, permit fees and similar surcharges, and all other expenses of any nature incurred by the Winner in claiming the Prize.

Required Documents:  In order to receive the Prize, Winner will be required to furnish proof of Promotion eligibility and identity including, but not limited to, a valid driver's license and/or US social security number where applicable. Winner must immediately claim the Prize and return to the Club any documentation required by the Club within 24 hours of notification (including the Confirmation, Release and Indemnity). Otherwise, the Prize may be forfeited. The Club's decision concerning all matters relating to any and all aspects of the Promotion are final and binding.

Privacy: Personal information collected by the Club will be used for administration of the Promotion. Entrants may also be contacted immediately or in the future by Club with respect to available ticket offices and other promotional opportunities. The Club will use reasonable commercial efforts to comply with Federal CAN-SPAM guidelines and Entrants may subsequently opt-out of receiving further emails by following the opt-out instructions contained in such email correspondence.

Publicity: To the extent permitted by law, each Entrant agrees that entry in the Promotion constitutes permission, in perpetuity, that the Club and each of their respective affiliates may use the Entrant's identity, name, image (including voice and video), likeness and biographical information, now or hereafter developed of Entrant's participation in the Promotion, for any purpose, including but not limited to publicity, promotional, advertising purposes related to such parties without any additional consideration or compensation of any kind.

Release: As a condition of entering the Promotion, Entrant agrees that (1) under no circumstances will Entrant be permitted to obtain awards for, and Entrant hereby waives all rights to claim, punitive, incidental, consequential or any other damages other than for actual out-of-pocket expenses; (2) all causes of action arising out of or connected with any Promotion or the Prize awarded shall be resolved individually without resort to any form of class action; and (3) any and all claims, judgments and awards shall be limited to actual out-of-pocket costs incurred, but in no event attorney's fees.

Liability: Each entrant: (1) acknowledges acceptance of the official rules and agrees to adhere to and be bound by them; (2) assumes all risk, responsibility, and liability for any personal bodily injury or death or any damage or loss of property, including any bodily injury or death to another person, directly or indirectly arising from participation in the promotion; and (3) agrees to release, discharge, indemnify and hold harmless the Club and its affiliates from and against all claims, losses and damages to party or person, including death, incurred or caused by entrant or entrant's representatives, directly or indirectly, in whole or in part, arising from or in connection with or related to the operation of or participation in the promotion.