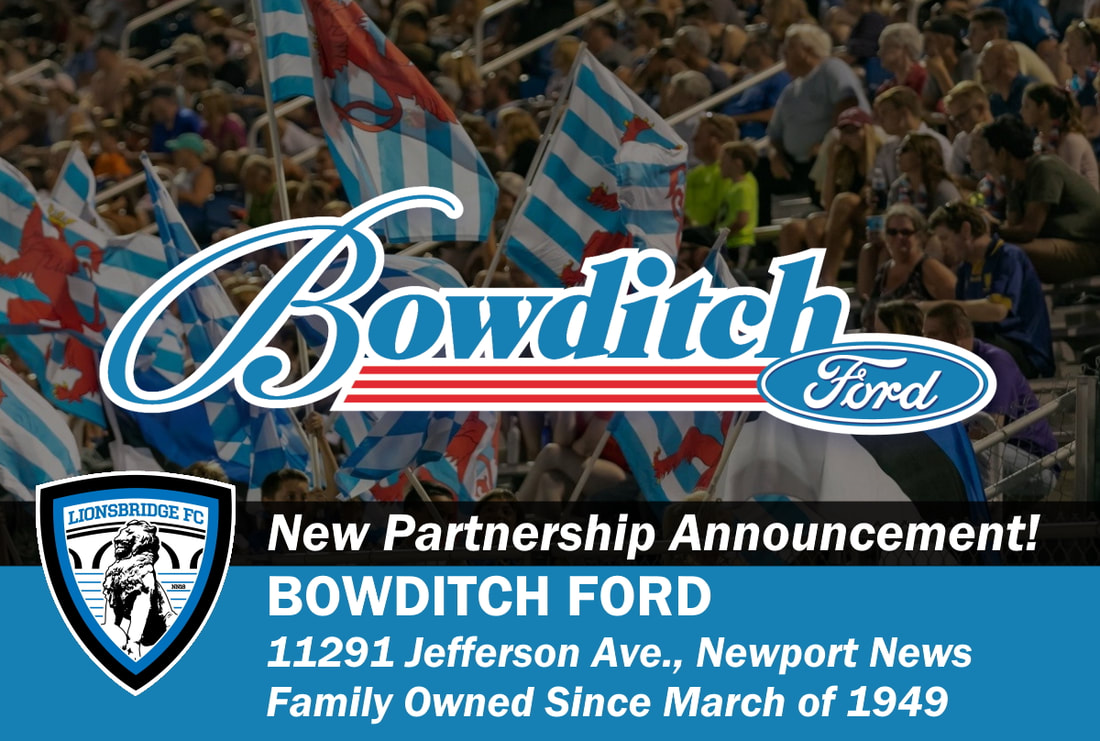 March 18, 2020 – Family owned on the Peninsula for more than 70 years, Bowditch Ford has signed on to become the newest sponsor of Lionsbridge Football Club.

As part of the multi-faceted agreement, Bowditch Ford becomes the exclusive presenting sponsor of Lionsbridge FC’s spectacular post-game fireworks shows all summer long. The dealership will also display a vehicle in the popular Festival Zone prior to all home games and will sponsor the “Bowditch Ford Drive of the Game” and the “On the Road with Bowditch Ford” video features throughout the season.

“It is always the right time to support local and we encourage all Newport News community members to get involved when possible. We recognize those organizations that strive for excellence in the community and maintain a strong alignment of health and positivity,” Casey Rosinski, President of Bowditch Automotive said. “Mike Vest and all of the folks at Lionsbridge FC are doing great work. We look forward to a big season this year in 2020. Go get ‘em, Team!”

“Bowditch Ford has been a pillar of the Peninsula community since 1949 and we are so proud to partner with a local, family-owned company that has stood for service and loyalty for many generations,” said Lionsbridge FC co-founder Mike Vest. “We are grateful for the support from Bowditch Ford. Partnerships like these allow us to create a unique atmosphere and a reason to cheer together as a community.”

Bowditch Ford is located in the heart of Newport News at 11291 Jefferson Avenue. Built new from the ground up in 2015, the state-of-the-art dealership is designed to meet the needs of every customer in every way. Bowditch Ford has earned the prestigious President’s Award for 25 years thanks to the personal attention tailored to each individual, which is the hallmark of the Bowditch Ford experience.

ABOUT LIONSBRIDGE FC:
Lionsbridge FC competes in USL League Two, the top pre-professional men’s soccer league in North America. The club was recognized in 2019 as the USL League Two Franchise of the Year. ​Founded in 2018, Lionsbridge FC has led the Eastern Conference in attendance with nearly 1,500 fans per game in each of its first two seasons. The team finished 3rd out of 74 teams in attendance in 2019. Seven Lionsbridge FC players have gone on to sign professional contracts -- three in the United States, two in England and one in Sweden and Australia. Home games are played on the campus of Christopher Newport University. Every game is preceded by a 2-hour community festival with bounce houses, family entertainment, music, beer garden and the area’s top food trucks.  All home matches are streamed worldwide on Facebook Live.