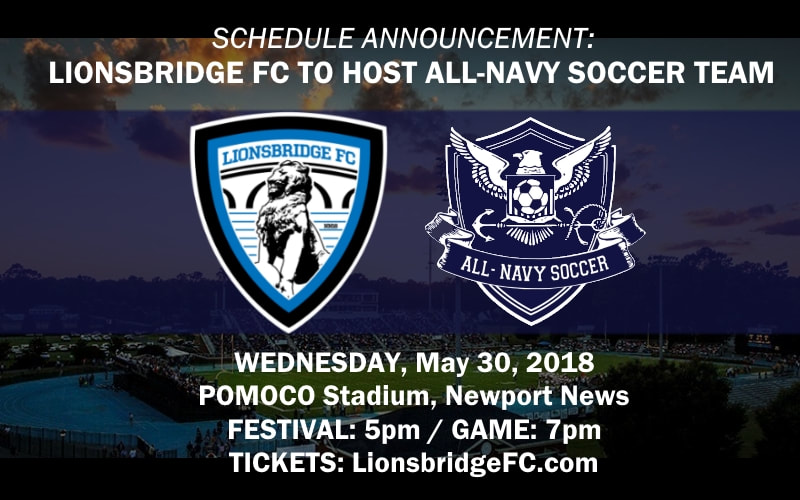 (March 2, 2018) – Lionsbridge FC has added a home game to its inaugural season schedule at POMOCO Stadium against the All-Navy Soccer Team on Wednesday night, May 30. The pre-game festival will begin at 5 p.m., and the game will start at 7 p.m.

The All-Navy Soccer Team consists of the top players currently enlisted in the United States Navy. The team provides an opportunity for Sailors with the appropriate skill set to compete at the highest level in the United States Armed Forces. The May 30 match against Lionsbridge FC will be part of the All-Navy Soccer Team’s training in preparation for the Armed Forces Championships against the U.S. Army, Air Force and Marines at Fort Bragg in June.

The All-Navy vs. Lionsbridge FC match will be part of United States Navy Night at POMOCO Stadium.  Additional details and ticket offers for Navy personnel will be announced at a later date.

“We are honored to have the opportunity to host All-Navy Soccer and to show our appreciation for the service and sacrifice of the United States Navy,” Lionsbridge FC co-founder Mike Vest said. “This is also a very special opportunity for our players to share the stage with the best and most talented players in the fleet.”

Lionsbridge FC Season Ticket Wristbands are available now for purchase to the general public. Single game tickets will go on sale in April. The first-ever home game for Lionsbridge FC is set for Wednesday, May 16 against new in-state rival Evergreen FC in the second leg of the Commonwealth Cup.

Each home game throughout the season will be preceded by a two-hour pre-game community festival complete with craft beer from Tradition Brewing Company, food trucks, bounce houses, music and family entertainment. Festival gates open at 5pm and the games begin at 7pm.

Season ticket wristbands are now on sale. Group tickets may be purchased by calling 757-656-9659.